How can Landlords and Tenants deal with Rent Increases?

10% of Landlords are unaware of EPC changes

Hi, I’m Amber Morgan and am currently working for Norman Galloway Lettings on the Kickstart scheme. As I am not from Nottingham, I was surprised to find that our office, located on Carlton Road in Sneinton, is surrounded by a plethora of fascinating history. I have put together a bit of information that I have researched that you may also find interesting…

Sneinton has always been a community driven village…

Up until the 19th century, Sneinton was merely just a small village overlooking the River Trent on the east side of Nottingham. This quickly changed when the industrial era arrived and the population drastically increased, bringing both challenges and advancements to its inhabitants. Much like other areas around Nottingham, the local industries primarily consisted of lace and textile manufacturing. However, in Sneinton, heavier industries were represented, such as the iron foundry, engineering works and brickwork. Workers lived close to factories and other places of work, making the village a desirable place for them to settle down with their families.

The construction of Victorian housing

In those days, poverty and poor cleanliness were unfortunately facts of life, houses were cramped, and the landscape was a slum because of negligent building regulations. It was not until the end of the 19th century when the land was sold to developers who built Victorian housing on the slopes of Sneinton Dale. These buildings were of much higher standard than the ones before them and some still stand today.

Around the 1930s Nottingham began to address the overcrowding problem caused by Victorian housing. Many individuals lived in Victorian housing that was old, overcrowded, unsuited for purpose, and damp. Unfit houses like these were demolished, and the land was redeveloped under the Carter Gate redevelopment. This redevelopment was paused during the second world war when the village was heavily bombed in a German air raid, which damaged and destroyed many buildings.


Colwick Woods was used for a prisoner of war camp 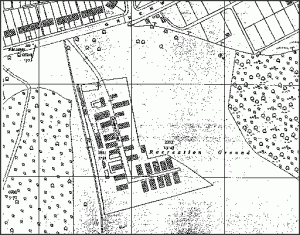 Photo from Friends of Colwick Woods

Colwick Woods, being one of many green spaces around, is almost as large as Sneinton itself. At this time, the golf course area within Colwick Woods was used as a prisoner of war camp. The camp was initially used for German prisoners and later for Italian prisoners in the second world war. The Italian prisoners were known to do community work such as building concrete roads, doing farm work, repairing shoes, and other jobs that benefited the locals. At this point, security for the camp was less strict, allowing locals to visit prisoners and build personal relationships. After the war, some prisoners even ended up marrying local girls and settling down in the area. Other prisoners were sent back to Italy and the camp was taken apart. The huts were temporarily occupied by families that were in desperate need of shelter.

Sneinton began to recover in the 1950s, under the Chedworth Estate development, in which a large amount of modern housing was built along with five multi-story tower blocks that still stand to this day. Many of these homes were affordable and close to places of work, encouraging economic migrants to settle in the village and further adding to its multi-cultural community. 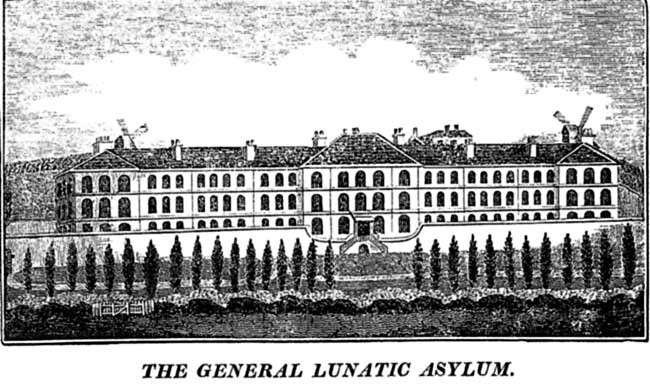 Photo from opposite p160 of Blackner’s History of Nottingham

If you’re a local, you will likely have heard of the ‘Mad House’, a nickname given to the Duke of Devonshire pub, which is now being transformed into residential flats. It is said that the guards from Nottingham’s Lunatic Asylum would go to the Mad House across the road to drink. The asylum was just a few doors up from where Norman Galloway Lettings is situated on Carlton Road. It was the first county asylum to open in England after the Wynn Act was passed in 1808, which allowed an asylum to be built in every county. Funds were raised and a plot of land was acquired in Sneinton where the asylum was then constructed. This institution was open from around 1812 until 1902 and the building was later converted into King Edward’s boarding school. Some of the children there were tragically killed in industrial accidents and the school’s headmaster, Alfred Tanner, quickly gained a bad reputation. This eventually led to the school’s closure. The building was demolished and has been the location of King Edward’s Park since 1920.

You can follow up on updates of the Duke of Devonshire’s transformation on Diane’s Nottinghamshire Property Blog social media links here:
TwitterInstagramYouTube

Peggers Inn and the murder of George Wilson

Just a stone’s throw in the other direction from Norman Galloway Lettings is another pub with an ill-fated backstory, Peggers Inn. Formally and most recently known as the Fox and Grapes, this pub was nicknamed Pretty Windows by locals due to its intricate design. In 1963, the landlord’s wife found her husband, George Wilson, lying on the doorstep barely alive after he had been brutally stabbed fourteen times. He passed away before the ambulance arrived. At the time, the investigation was Nottingham’s largest police operation, yet there have only been theories of what could have happened. The murder remains unsolved and is still an open case. The pub is located where Sneinton’s old fruit and veg market was on Southwell Road. It was permitted to open in the early hours of the morning to cater to the market workers; however, it was forced to close when the market moved to Lenton. Despite its rather grim history, the community was delighted to hear of the reopening of the Fox and Grapes in 2017, with the manager describing it as “a traditional
pub brought into the 21st century, a place more befitting of the area.” 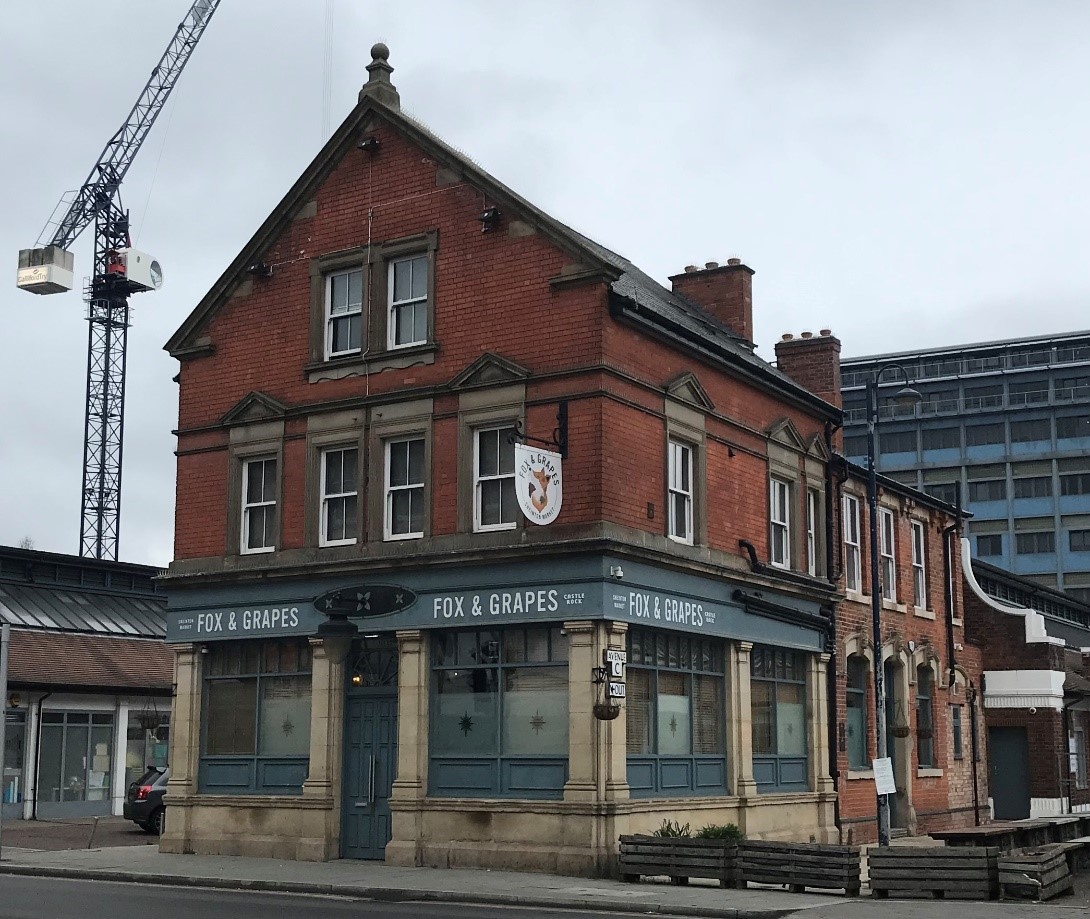 The Fox and Grapes

Charabancs, carts and horses kept behind The Wheatsheaf

Records of this are difficult to find, but older locals will remember charabancs and horses along a field behind The Wheatsheaf, which is a pub located on the main road into Sneinton, placing it in a very busy and accessible area. There are rumours of people living in these charabancs, with a well-liked individual known as Gypsy George being one of them. He was a survivor of the first world war, having suffered from wounds that were inflicted in two separate battles. He is remembered as Gypsy George as he used to travel around the village with about twenty horses which were rented out along with carts to villagers and market workers as they were required. 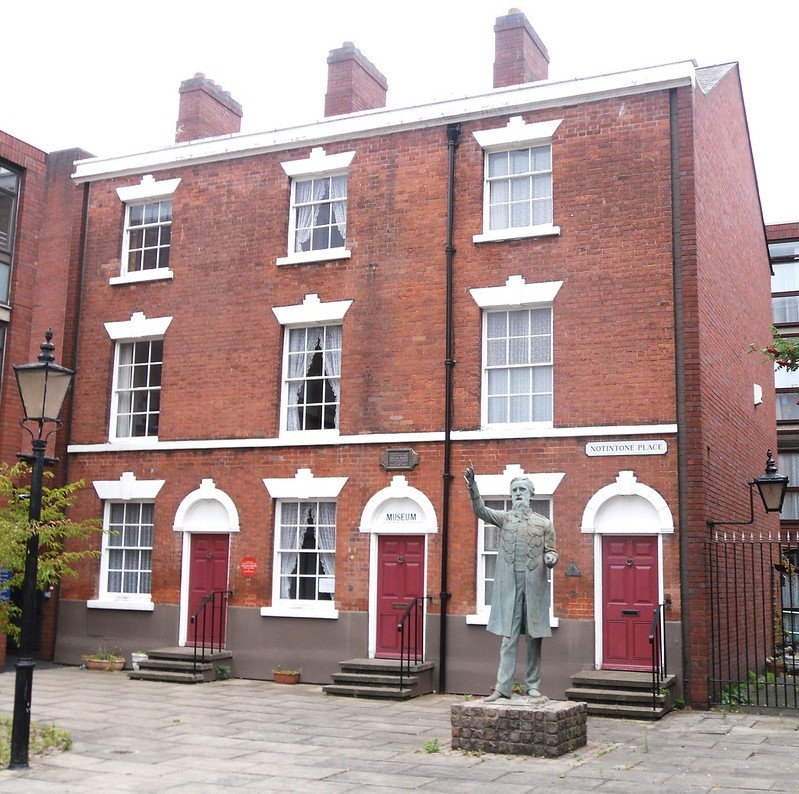 Harry Wheatcroft was a famous rose grower who was born on Handel Street. He popularised roses amongst British gardeners and was quite a popular, flamboyant character. Wheatcroft’s niece was married to Tom Baker, who, later in his acting career played the role of the fourth incarnation of The Doctor in Doctor Who. To bring it full circle, Baker’s son, Piers Wheatcroft Baker, is now the landlord of The Bath Inn, which is a pub positioned on Handel Street. He recently renovated the pub with Egyptian-themed decor.

The story of Green’s Mill

Even though much has changed to shape the way it is today, Sneinton’s village-like characteristics have been kept alive. Another historical building that has represented this through its lifetime is Green’s Mill, which came back from disrepair time and time again. The mill was built by baker George Green in 1807 for the milling of wheat into flour, then inherited by his son who is remembered as mathematical physicist, George Green. At this time, Green’s Mill was reported as the “most powerful and up-to-date of the twenty or so windmills in and around Nottingham.” Whilst this became the main source of the family’s wealth, the mill unfortunately became uneconomic and was forced to close when faced with the new competition of steam-powered roller mills in the 1860s. It fell into disrepair until it was eventually converted into a factory for shoe polish. On the 10th of July in 1947, the mill caught on fire and only the brick tower survived, leading to it becoming abandoned again. When it was faced with the threat of demolition in the 1970s, the University of Nottingham started a fund to preserve the tower as a monument. Due to this, it was restored, brought back to working order, and a science centre was built around the mill yard. Since then, it has been open to the public to tell the story of George Green and his mill. 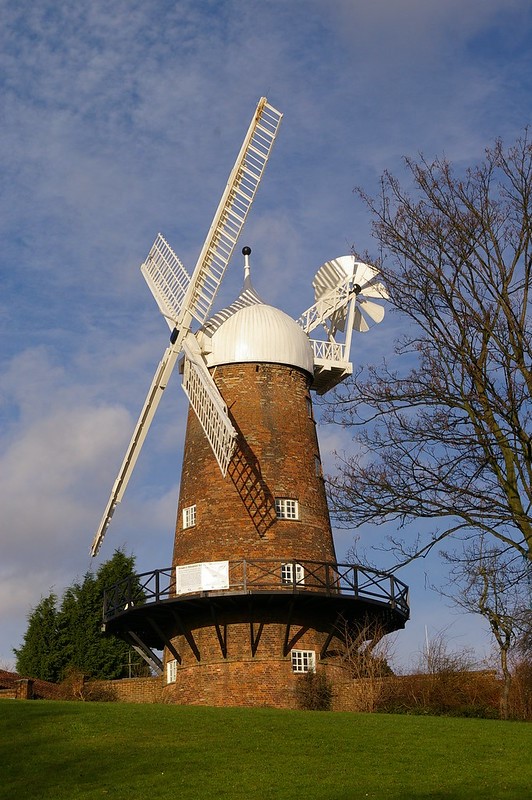 This story was one of many often told at the much-loved Sneinton Festival most Julys from 1995 to 2018. Unfortunately, the festival was cancelled in 2019 due to a lack of funding and volunteers, although there have been discussions and hopes for it to come back. The festival brought the community together through workshops that led up to a festival week and finalised with a carnival day. This gave young people the opportunity to put their creativity to use by producing artwork, decorations and costumes, as well as holding dance and performance workshops, all in preparation for the festival and carnival. There would be a new theme every year in which community issues would be confronted. For example, recycling, accepting diverse cultures, use and access to the media, or the advancement of science and technology, were all topics that were addressed. It really is a shame the event was cancelled as it was a great way to unite the community and share stories about life in Sneinton.

Sneinton is rich in history and has many places of interest…

Although housing costs have risen over the past few decades, housing remains cheaper in Sneinton than it is in other Nottingham suburbs. Aspects of creativity are featured throughout sculptures and other forms of artwork, such as The Sneinton Dragon. This is a stainless-steel sculpture created by a local craftsman named Robert Stubley. When the city council proposed a piece of street art to represent them, the people of Sneinton requested a big scary dragon to symbolise their vibrant spirit which has remained resilient to this day.

I hope that I have done Sneinton proud in sharing some captivating facts about its colourful history, so that on your next visit to Nottingham, you may wish to hunt down some of the places I have mentioned in this article.

Can't find what you are looking for?

Our helpful team are on hand to answer any queries and concerns you may have.

How can Landlords and Tenants deal with Rent Increases?

10% of Landlords are unaware of EPC changes